Tutorial 184 is based on the Markplex SuperTrend indicator which is a stop and reverse (SAR) indicator that trails price action See the original indicator: tutorial 173 here.

This implementation calculates the Average True Range (ATR) of the average price using the exponential moving average. A user input multiple of the ATR is added to or subtracted from the average price to give Upper and Lwr respectively, depending on the direction. Direction is determined by the Close of a bar relative to the value of the SuperTrend, Upper and Lwr using the following code:

There are many different interpretations of the so-called SuperTrend indicator. In this Markplex version the SuperTrend value is also tightened (i.e. moved closer to price) by using an acceleration factor which increases incrementally each bar by user input: AFStep up to a a maximum value of user input: MaxAF.

In addition a ‘Supertrend’ exit is calculated (SupTrendExit). The value of this is set to the value of SupTrend when direction changes and is then calculated using:

A buy market order is generated when Dir changes from -1 to 1, provided that LongFilter1, LongFilter2 and LongFilter3 all evaluate to true and the program is not currently in a trade.

A sell short market order is generated when Dir changes from 1 to -1, provide that ShortFilter1, ShortFilter2 and ShortFilter3 all evaluate to true and the program is not currently in a trade. 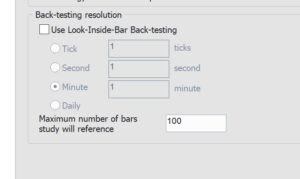 The tutorial gives an example of LongFilter1 and ShortFilter1 using an implementation of the Moving Average Gap Ratio. If this is used, the user will need to change the strategies’ “Maximum Number of Bars Study will reference” to be equal to the value of SlowLength. The user can experiment with replacing this filter with their own as the strategy tends to get ‘whipsawed’ in non-trending markets.

To use this strategy make sure that “Enable intrabar order generation and calculation” is not selected.

Tutorial 184 (indicator and strategy) applied to a chart

Hopefully you can understand this tutorial and replicate it for your own use and education. If you want to save some time typing in the code then the Tutorial 184 programs (indicator and strategy) are available for  IMMEDIATE download for $39.95  by clicking the following ‘add to cart’ button.

The programs work in TradeStation and MultiCharts.