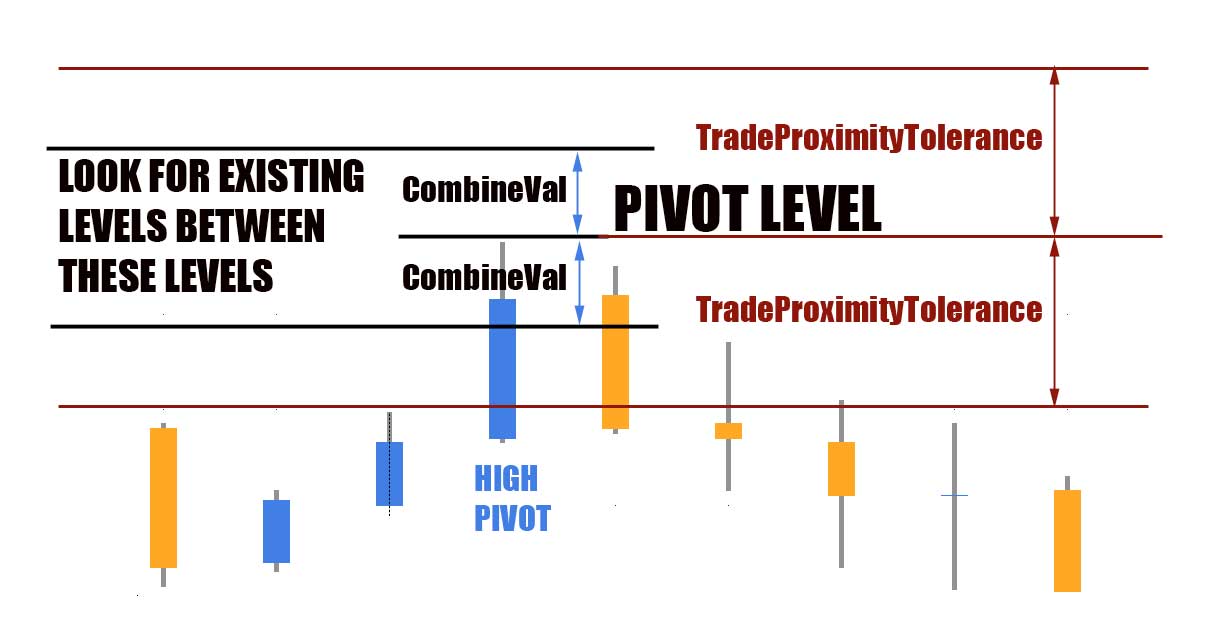 The above illustration shows a high pivot. The program searches for and combines levels within the range CombineVal above and below the pivot level. It then searches again for levels over a certain strength value in the range TradeProximityTolerance above and below the pivot. In this case, if such a level were found a sell short order would be made because this is a high pivot.

Calculation of the support and resistance levels

The program is similar to program 55 by analyzing the current chart as it looks for pivots. The idea behind the program is that if pivots have occurred at a specific level before, then that price level may have some significance as far as support or resistance is concerned, especially if they have occurred at the same level (or near to the same level) on several occasions before.

Each time a new pivot is found, _Program85 stores information about the pivot (i.e the datetime it occurred, the number of occurrences, with initial value equal to one, and the price level) in a vector: LineVector. This vector is in turn  stored in another vector: PivotVector.

Horizontal lines representing the support and resistance levels are drawn for the last bar on the chart if the DrawLines user input is set to true.

The performance of program 85 depends on many factors including the symbol, bar length, amount of data loaded and the user defined filters. The program could be potentially improved further by the user by analyzing the potential entry bar as to how it is situated in relation to significant levels stored in PivotVector.

CombineVal( 0 ), // The price difference above or below a line to increase the occurance value for the line
TradeProximityTolerance( 1 ), // How close a pivot needs to be to initiate a trade
LeftStrength( 3 ), // Left strength of pivots
RightStrength( 2 ), // Right strength of pivots

Strength( 2 ), // The number of pivots that have been combined with a specific horizontal line

DrawLines( False ), // Set to true to draw the horizontal lines

LineThickness( 1 ); // Defines thickness of lines. LineThickness can be a positive integer up to 6

The program 85 strategy (strategy component) is available for  IMMEDIATE download for $74.95  by clicking the following ‘add to cart’ button.

The tutorial program is not compatible with MultiCharts as it makes extensive use of objects.